In the lead-up to the All-Star Game, Major League baseball launched a social media experiment: one last push to get some all-universe baseball players into the game, guys who hadn’t made it on popular vote alone, by tallying how many times a specific hashtag was hashed. It does blow my mind that an all-universe player like Anthony Rendon can be so criminally overlooked but that’s all-star games for ya, and it’s also what happens when you’re humble and refuse to self-promote, characteristics that are not exactly sought after (“actively rejected”) in today’s media marketplace, it’s making us all worse people living worse lives, but that’s another point entirely.

#VoteRendon was the hashtag of the day, and I tweeted it a few times, but just tweeting #VoteRendon in bulk was so boring and banal I sort of refused to do it unless I could come up with actual decent tweets. I tried this one:

I freely admit this was a cynical and planned manipulation of people’s clicking habits. But I like to also congratulate myself on having properly read the audience and formulated a social-media strategy of sorts, that “seemed” to work in the sense that I did actually gain a few followers from it.

And then I tweeted this one, a far more obscure, let’s say “elevated,” take:

Tony is the Telecaster of baseball players. Super understated but basically critical to doing well. #VoteRendon

This tweet didn’t get as much engagement but I failed to hashtag #Telecaster, a fairly major tactical shortcoming on my part, because I could have drawn in more clicks by bringing together two basically unrelated subjects and audiences.

This tweet, however, inspired further thinking, and is directly responsible for how I arrived at this abomination of an idea: If Tony is a Telecaster, what is Max? What is Harper? This is a bad bar-type discussion but if I’ve learned nothing else, it’s that bad bar-type discussions are the apotheosis of online discourse.

Proceed at your own risk.

This is the classic of the classic of the classics. This is the guitar’s guitar. It’s less “raw sex appeal” and more like a rare artifact of human greatness. When I think of Max, I think that this is sort of why we have pitchers and pitching in the first place. I think that he pushes himself in a way that cause nearly all other bodies to implode and he does not. I think of a guy who has the mental toughness–learned, for sure–that few pitchers have. The ’62 Les Paul is so worshipped it’s almost a cliché but the fact is that there is just nothing on Earth that sounds as full, rich and powerful as this slab of mahogany. It’s a visceral guitar. It’s a guitar for a guy with high 90s velocity and command of four pitches including a “power slider” that goes off the grid as it enters the strike zone.

The ’62 LP has one rival when it comes to being the guitar, and that’s the ’59 Black Beauty. I personally prefer ’em Neil Young-style, with single-coil “p-90” style pickups, but it should be noted that I would happily take one with any pickup arrangement. I have had the extraordinary opportunity to play one of these and the neck, which I believe was original, was the greatest neck I’ve ever put my hands on. The ’59 Black Beauty has got tremendous power: it’s a solid slab of mahogany and two beefy-ass pickups. Bryce can swing it, we all know this. But it’s easy to overlook that he’s a hitter first, power-hitter second. His command of the strike zone is like he went into edit-player mode and gave himself a 99. His eye-hand coordination is alienesque. He’s a very good defensive player too, with a laser for a throwing arm. There is a lot more to his game than moon shot homers and there’s a lot more to the Black Beauty than chugging riffs.

You find me a team without a power-hitting first-baseman and I’ll show you an incomplete team. You show me a guitarist without a classic, black-and-white Strat, and I’ll you show you an incomplete guitar arsenal. It really is that straightforward. Forget about the sentimental beauty of seeing Ryan slug again. His hot start fueled the hot start of the team, and that hot start translated to a critical margin later in the spring-summer as the team found injury and pitching problems cropping up. His scorched “oppo” line drives are a thing of beauty.

The TV-yellow Les Paul Junior was brought to life as a stripped-down, student-type budget instrument. And it has become, over time, a classic instrument. I see Murphy in this guitar. I see a guy who hits everything at all times. Likewise, the ’59 LPJ is as much a punk and rock guitar as it is a jazz guitar; the p-90 pickups add a layer of complexity to the solid-body heft. Unlike the really swampy and intestinal classic Les Paul, the LPJ has a pronounced bite in the mid-range frequencies, a bark, almost a howl–it’s not a slugger but it has the kind of line-drive power that scores run upon run upon run. While not a superstar guitar like the LP, the Junior is suitable for every genre, and the fact that it really found its following many years after its initial introduction just speaks to me about the arc of Murphy’s career. Murphy has a plan for every at-bat and any musician with a plan should not be without a Les Paul Junior, or at least guitars with p-90 pickups.

Speed and power and just pure sex appeal come together in one instrument. Few play louder than J, but it’s not just slamming amps at maximum volume; his use of suspended chords and jangly open-string chord voicings are as much a part of “the sound” as anything. He’s Peter Buck wallowing in a well of sludge. Trea can small-ball you to death. Trea’s got the line-drive power to rip mistake pitches into doubles and home runs. He’s got the speed and the power and the aggression to take triples. His defense–range, the throwing arm, the glove work–is also outstanding. Trea’s all-around game is both overtly “sexy” and also subtle and quiet and that reminds me of the extreme contours of the Jazzmaster, a guitar that is flashy as hell, but not obscene or vulgar; it’s stylish and sleek, and it’s also a pure tone machine. 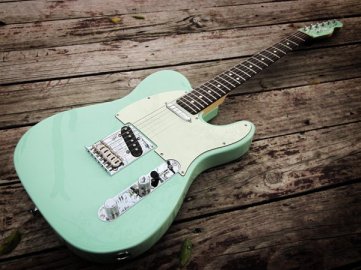 The Tele doesn’t talk about itself. The Tele doesn’t try to destroy your eyes with neon paint jobs or nearly pornographic angles. It’s just there, and it does what it does, all day, every day. It hits. It plays outstanding defense. It rocks. It’s bluesy. It’s jazz. It’s metal. (If you think you can’t play metal on a Tele, well, nobody bothered to inform Chris Cornell as such. He rocked ’em all the time. So does Mascis for that matter.) The Tele is Anthony Rendon because it is seems so humble and simple (“only” two pickups! “only” two knobs! “only” one switch!) but it covers an enormous spectrum of tone and it does everything as well as it can be. You pick it up and plug it in and 98% of your work is done. You give Tony a bat and a glove and you will have run production, defense, base-running and  steady, quiet, reliable greatness.

Before going down with a foul-ball-induced foot injury, J-Dub was posting an OPS in the mid-800s while playing far-better-than-anyone-expected defense in the outfield. Everything about J-Dub says, “aging like a fine wine or scotch,” and nothing says that better to me than a wine-red semi-hollowbody where you can see the woodgrain and you can hear the depth of the notes, there’s a maturity and fullness to these guitars that are just inexplicable short of hearing and playing them. The shape is a classic guitar style but  they can bring the heat–see, Eric Clapton and Cream–these guitars surely can scream as J-Dub can still punish pitches. Maybe it’s not as “sexy” as a Jazzmaster, but it’s a full-throated rock machine that will always have a place in a guitar arsenal. J-Dub might be 38 but he looks like he could keep hitting in perpetuity.

The catcher has to do everything: defend the position, wrangle pitchers, call pitches for every individual opposing batter, create detailed plans-of-attack, oh, and also hit. Every great rock band has a great bassist. The bass is both a melodic “lead” instrument and a critical part of the keeping the “rhythm” section on track. Wieters has come up with some big, big hits for the club. He’s learned an entirely new pitching army essentially on the fly. He’s made some big plays defending the plate. He’s just been involved, and positively, in every aspect of the team. His OPS has tailed off and he’s had issues with passed balls. I don’t think anyone can deny that. But he’s also played through a few exhausting stretches and he’s done so at the kind of glue-level that I think of when I think of the essentiality of the Fender precision bass.

The Rick is neither a Tele, nor a Strat, nor a Les Paul–it’s completely its own thing. It’s most famous for its jangly, reedy twang. But, when pumped through, say, a 100-watt Orange or Marshall stack–watch out. The Rick 330 can be a real fire-breather. When I think of Stras, I think of the brilliant “stuff”–the evaporating curveball, the tumbling sliders, the barrage of high-90s fastballs. He’s really his own man. He’s not Max. He’s not Bryce. He’s profoundly gifted and also profoundly quiet about it. The Rick is not an obvious guitar. It’s not one that shows up in pop clichés. But those who know guitars, know the Rick 330. Fans who know pitching, know how good Stras really is. 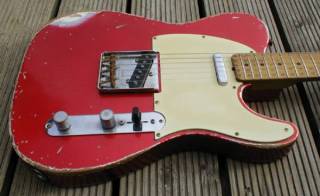 This guitar has been through some shit. It’s been dropped. It’s been discarded. It’s been told, “you’re scrap.” It’s heard “your career is over unless you do x y or z.” It’s been written off. And yet here it is, continuing to just crank out fantastic tone, session after session after session, song after song after song. Where would the Nats be without any of these guys? Yes, Tanner’s having a tough year, but so what–he will be critical for us at some point this year, and we need him, just like we need a Tele that’s had it’s neck broken and has scratchy pots and has it’s intonation all shot-to-shit–all of these guys have grinded to create fantastic professional sport careers for themselves, and not only is it an honor to watch them play, and play well, and continue evolving on a daily basis, they’re incredibly important component parts to this club. And, as I’ve already said, you should never leave home without a Tele. 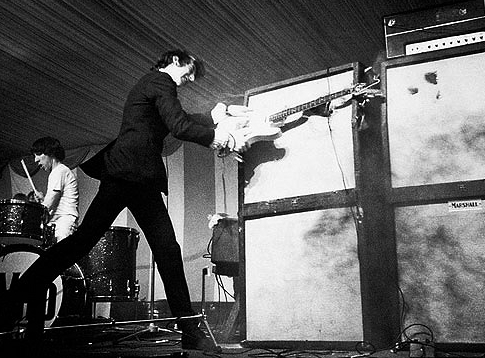 Look I’m not here to trash the bullpen. That’s been done and it’s old and it’s boring. Let’s find something new to say. Let’s focus on what, for me, was a major first-half highlight: Enny Romero and his 101-mph heat as it K’d Freddie Freeman, Destroyer of The Nationals. I had the privilege of seeing him pitch in person here in L.A. and he was absolutely outstanding then, too. Matt Grace has had several moments of outstanding play, particularly (again) those two Ks of Freeman. Let’s focus on Ollie Perez coming in and throwing 95-mph heat after the Strickland-Harper brawl and locking down the win in San Francisco.

Our bullpen is very much like a smashed Rickenbacker and a destroyed Marshall stack; artful, messy, and ultra-volatile–like The Who.